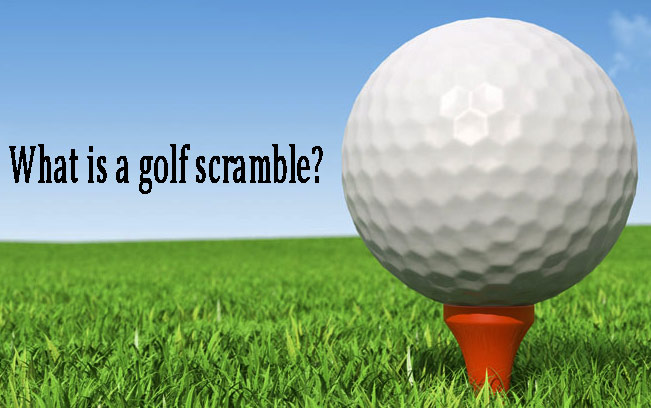 A golf scramble is a fun and informal golf tournament format to get even the most novices of golfers engaged in the game. It is a great way for players of different skill levels to play together, making it perfect for charity fundraisers, corporate events, and other social outings where you want all participants to feel included. Let’s learn more about a golf scramble format and how it works so you can plan your next event.

What is a golf scramble?

A golf scramble is an event where groups of four golfers play together using the best shot from each player in the group. Each member of the team tees off on each hole.

An event is usually a team event where the player’s tee shots are selected for the best shot among the group. This process is repeated until the hole is completed. The format is used in charity golf events to expedite play and help less-skilled golfers enjoy themselves.

However, this format is great for beginners who want to involve in a golf tournament but might not be quite ready to play by themselves. It’s also a great way for more seasoned players to mix up the standard golf game and have fun with new people.

When is a golf scramble used?

As a format, the scramble is quite flexible. It can be used in a casual setting or as part of a tournament. Because it doesn’t involve keeping score and allows golfers to choose their own best shot from the tee, it’s great for beginners and inexperienced players.

You may find that social groups like your local golf club use a scramble for their annual party or fundraiser.

So regardless of your ability or motivation, you’ll likely find an opportunity to play at least one round of scramble during your time on the course.

What are the scramble golf rules?

The scramble golf rules are almost identical to traditional rules of the game, with a few key differences. Most importantly, everyone plays from the same position, whether on the fairway or rough.

Usually, you’ll play from whichever spot offers your group the best chance at getting close to the hole.

If you and your friends can do some research and find out what holes give you trouble, you’ll be able to save time on those holes by choosing spots that work well for all members of your group.

The most important aspect of your golf scramble strategy is to choose the right team. The team you select will have a major impact on your success, so it’s important to form a team that compliments each other’s strengths and weaknesses.

You may not always be able to hit from the ideal position or make birdies or pars every hole, but if you follow these simple guidelines, you can put together a very competitive scramble score!

A scramble can be played as a two-person, three-person, four-person, or five-person team. A team scramble is when each foursome member has an assigned ball that they hit throughout the round, and all scores count toward the team total.

Here are just a few examples of how to scramble you can play format golf:

The most common scramble format is Texas Scramble.

It requires all team members to hit the ball at once and select the best one to continue to play with.

However, in Texas Scramble, each player must hit from that point forward and cannot use the tee box again after that shot has been taken.

You have 30 minutes to play 18 holes in Texas, including all 18 holes at the Texas scramble. It would include navigating around cacti and hot sauce bushes with your clubs.

You have 60 minutes to complete 18 holes at the Florida scramble. That would include navigating around cacti and hot sauce bushes with your clubs.

You have 24 hours to play 36 holes in Las Vegas, including all 36 holes at the Las Vegas scramble. That would include navigating around cacti and hot sauce bushes with your clubs.

In this style, players congregate around the ball after hitting it. They often “scramble” together to find it and take multiple shots until they get it in the hole.

This style is also known as “shotgun scramble” and involves all players hitting their ball at once. The team then selects which ball is best positioned for their next shot.

What is a golf scramble vs. best ball?

The best ball format is when the team plays each shot, but only one ball is in play. Then that team member with the lowest score on that hole hits their drive, and so forth.

All players would hit their drives and choose the best one to take forward in this case. You would play the second shot for that hole from where it hit the preferred drive. And all team members would again select the best ball.

This pattern continues until someone on your team gets a hole-in-one. The lowest score on each hole wins.

In contrast, a scramble format involves all players hitting their drive out of bounds (or poor lie). Then play their next shots from where they hit their last ball into play.

The game itself is simple. Each player hits a tee shot at the start of each hole. The best shot of the bunch is then particular. Also, all the players play their 2nd shots from that position. This pattern continues throughout the rest of the hole until the ball is holed.

So what makes this game such a hit? Well, for one thing, it’s social. Since golf is an individual sport, scrambles allow players to work together and learn from each other’s strengths.

It’s also fun! Being part of a team means you can have more fun out on the course without worrying too much about your score—the emphasis is less on competing against other groups and more on getting a good score with your teammates.

And in most cases, it helps speed up play, so you’ll spend less time waiting around between shots.

What is the difference between a scramble and a shamble in golf?

In a scramble, all players on a team hit their tee shots. The players then choose their best shot, and all hit their second shots from this spot. This process continues until the ball is holed out on each hole.

A shamble is similar, but players get to pick which drive they want to use for their team’s second shot after all players hit their drives.

You have two scores (and two-stroke totals) in a shamble format for your scorecard. Your score from when you play your ball; and the scramble score for the group you are in (remembering that only one player’s drive gets used per hole).

Q1: How to play a golf scramble?

In a scramble golf tournament, teams of two to four players take turns hitting their golf balls from the tee box. Each team member continues to hit their ball until the hole is completed. The team then chooses which ball they like best (usually whichever ball is at the best spot).

And all members play their next shots from that location. The goal is to get the ball in the cup in as few strokes as possible.

If one player hits out of bounds, they must hit again from the point where they originally hit their shot. If your ball lands in a hazard, you must hit it out of the hazard on your next shot—you can’t move it back to land.

Q2: What is a Texas Scramble golf game?

A Texas Scramble is a team game where every player hits a tee shot. Then, the best of the four tee shots is selected on each hole, and all players play their second shots from that spot.

This process continues until the hole is completed, with only one score being recorded for each team. The team completes the hole when a single player on the team holes the ball out.

After a few rounds, you may notice that the member with the best score on each hole is making every shot for their team for the next couple of holes. Their teammates are free to offer suggestions throughout the round, but this player must ensure they are aware of all opinions and decide which shot to take.

Some golfers like having the pressure of being in control, while others prefer to have someone else make those decisions. Try out different roles to see what works best for your team, or switch it up each time you play.

You should now be able to join any scramble golf tournament and hit the links with confidence. Hopefully, you’ve learned something new about this format and will be ready to try it out when you join us at one of our signature charity events.

Hey, my name is Raymond and I run the Elect Golfer Niche Website. You could say I’m a lifelong golfer.
You can get on my website about the Best Golf Tools and Accessories. Also, we covered all types of Golf product reviews