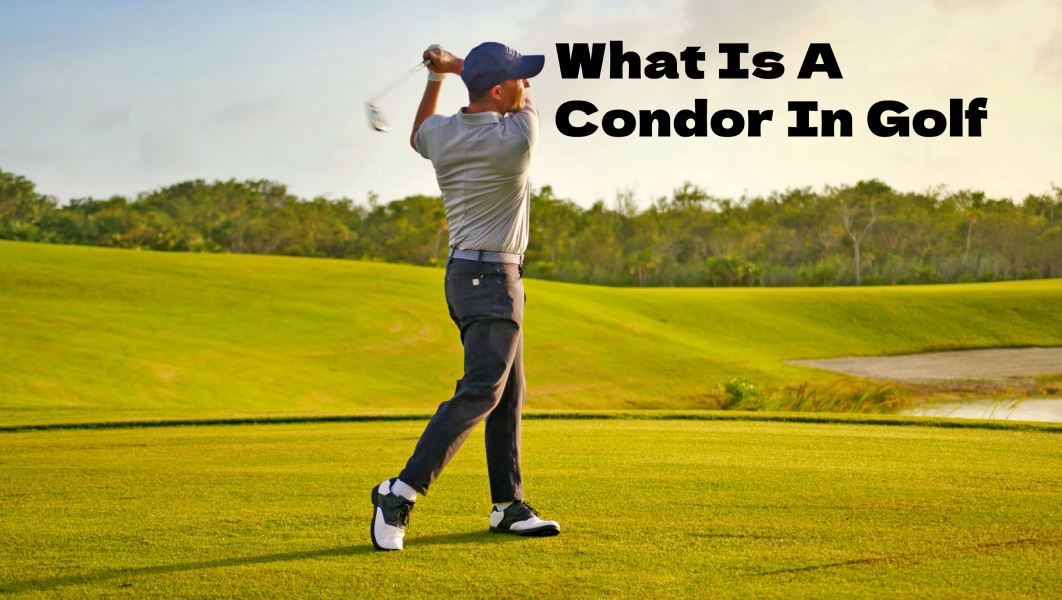 If you are a regular golfer, you must have heard the term “Condor” and the word that comes with its rarity or impossible goal. So, have you ever wondered what is a condor in golf? Why is it so rare? Has anyone ever hit a condor?

When a golfer scores a hole in one shot on par 5 is considered a condor. It will also be counted as a condor if anyone can score a hole in two shots in par 6. There are only 6 verified condor records in golf history and all of them are on par 5.

In today’s article, I’m going to answer all the inquiries about condor, one of the rarest incidents in golf history.

What Is The Rarest Shot In Golf?

Condor is one of the rarest shots in golf. It’s like a next to impossible goal. Like most of the other golf terms like birdie, eagle, or albatross, the condor was also named after a bird.

Unofficially, a condor is also called a triple-eagle or double albatross. So why is a condor so rare in golf? Let’s see. When a golfer scores a hole in one shot on par 5 it will be a condor. All the condor till now happened in par 5.

It will also be considered a condor if anyone can score a hole in two shots on par 6. But so far, it has remained beyond everyone’s reach.

In par 3 and par 4 scorings a condor is not possible. To score a condor, the golf ball needs to fly over the trees, and then it needs the help of wind or hill to roll over the hole. It requires everything highest level of skills and most importantly luck.

Has Anyone Ever Shot A Condor?

Though it looks like an impossible goal, few pros have actually achieved it.

As of October 2022, only 6 verified condors have been recorded in history. 6 legends who concord this near to impossible task are:

Larry BruceLarry Bruce is the first golfer who hit a condor. In 1962, he played par 5 in 480 yards on the fifth hole at the Hope Country Club in the USA. The ball went over the tree and rolled into the hole.

In 1973, Dick Hogan hit a condor shot in 456 yards at the Piedmont Crescent Course in North Carolina.

Mike Crean hit a 517 yards condor shot without cutting over a dogleg in Denver Green Valley Ranch Golf Club in 2002.

The youngest golfer who wrote his name in this list is Jack Bartlett. He was only 16 when he hit a condor on a par 5 at the Royal Wentworth Falls Country Club.

The most recent name in this list is Kevin Pon. He played the longest hole in golf history. In 2020, Kevin played a 667-yard condor on the 18th hole! This history was made at Lake Chabot Golf Course.

What is the difference Between An Albatross And Condor in Golf?

Albatross and condor are both the toughest and rarest feat in golf. So, let’s see the difference between these two feats.

What Is Better Than A Condor In Golf?

Condor is undoubtedly the toughest and rarest shot. But something can be more complicated than that. Ace or Hole-in-one is considered when someone hits a hole in one shot. Aces are also rare but as not as condors.

Most of the aces are accomplished on par 3 and some on par 4. In par 5 it doesn’t make any difference with the condor. Both of them need to hit the hole in one shot. But it makes a massive difference in par 6. Ace or Hole-in-one is more difficult to score than a condor on par 6. To score a condor, you will have two stoke. But in ace, you will have only one shot to score a hole. There has never been a condor on par 6 in the history of golf. So an ace in par 6 is far more than that. If even this happens, it will be the most historic and proud moment in golf history.

What Is The Rarest Shot In Golf?

A condor is one of the rarest shots in golf. When a golfer scores, a hole taking two fewer strokes is called a condor. In par 3 and par 4 scorings a condor is not possible.

If anyone can hit a hole in one shot on par 5 it will be a condor. It will also be counted as a condor if anyone can score a hole in two shots on par 6.

Has anyone got a condor in golf?

Incredibly 6 people have scored a condor. They are Larry Bruce, Dick Hogan, Shaun Lynch, Mike Crean, Jack Bartlett, and Kevin Pon. Any of these condors are not scored in any major tournament or course.

Condor is one of the rarest occurrences in golf. Scoring and even witnessing a condor will definitely be the luckiest moment for anyone. This article has covered all the details about condors and some other related topics about it. I hope it helps.

Hey, my name is Raymond and I run the Elect Golfer Niche Website. You could say I’m a lifelong golfer.
You can get on my website about the Best Golf Tools and Accessories. Also, we covered all types of Golf product reviews

No comments to show.